Best Breeders Team of the day

Marek Dog CC and Runner up Best of Breed

Archer and Hank won their Class's

Bella and Luna won their class's 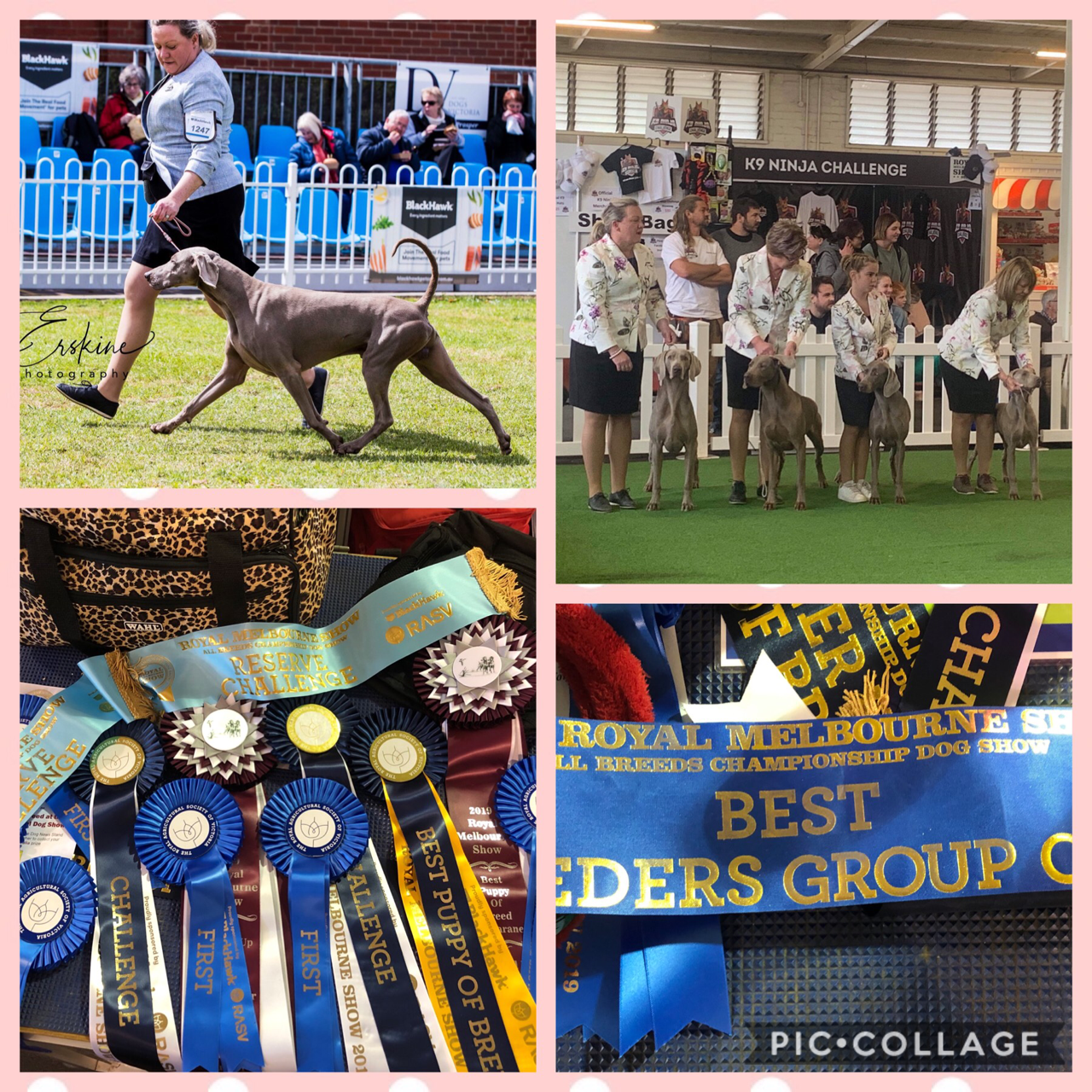 What a day BEST IN SHOW for Marek at the Weimaraner Club of Vic Inc Double Championship show.

Emmie was Rec CC and Puppy in Show 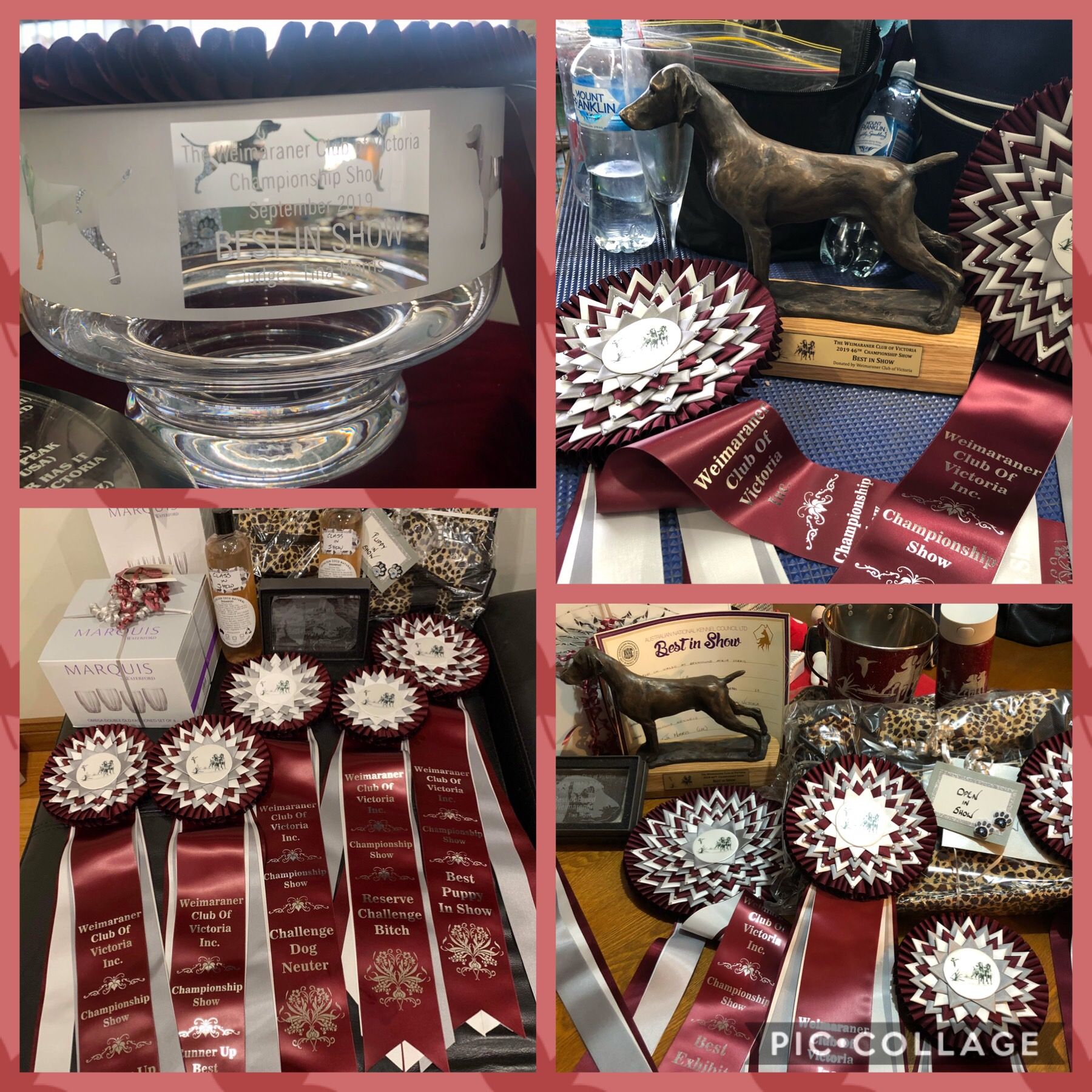 Was a massive year for Bromhund Kennels

I would just like to thank all the people that own our dogs and did something with them getting us to number *1 Weimaraner Breeder again this year *1 Number Gundog Breeder in Victoria and only missing out narrowly for number 1 Gundog Breeder Australia wide. Unfortunately, due to the number of weeks it takes to get titles processed.

Thanks to owners handlers and cares for our wonderful dogs. Best wishes for our young team in 2020. 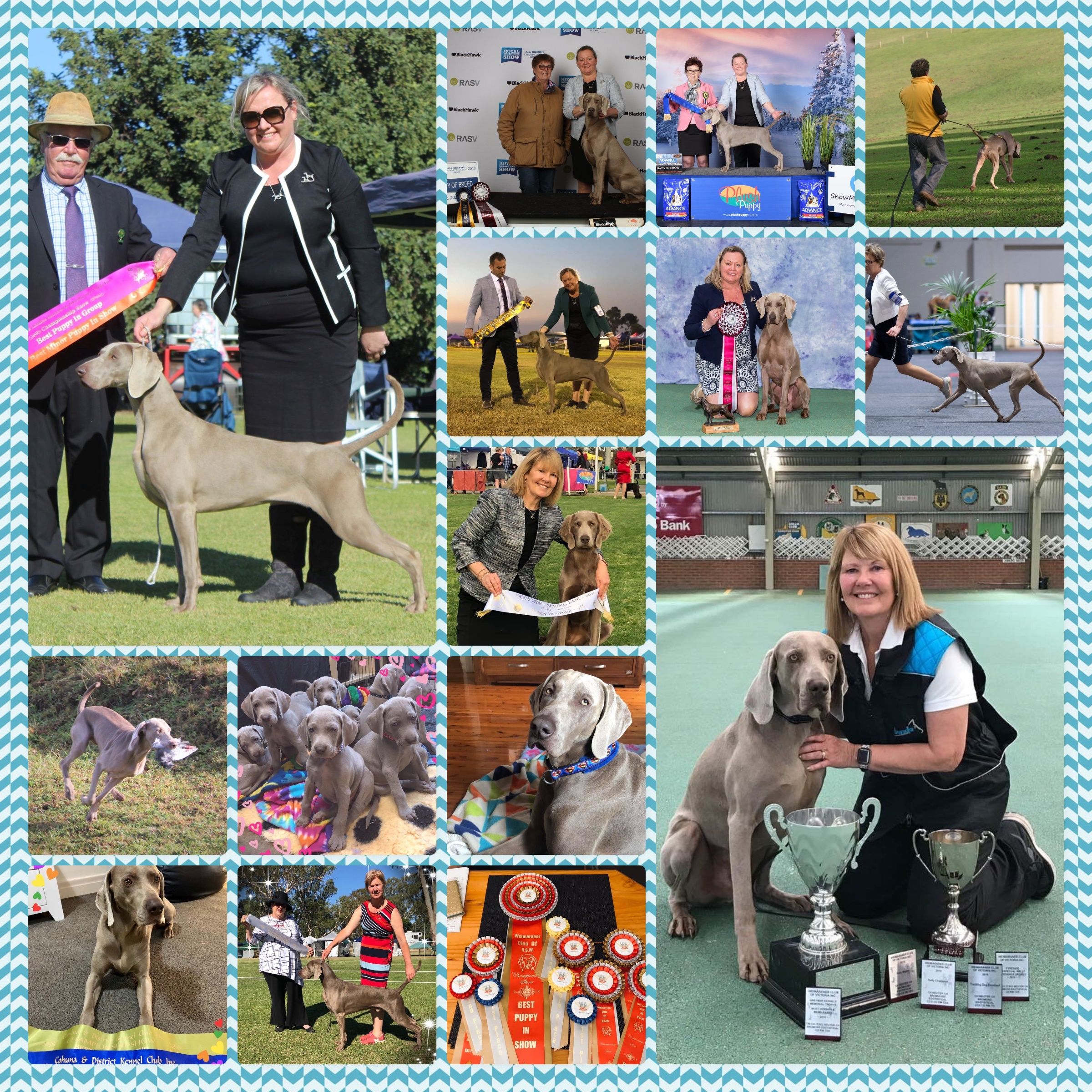 End of Year Wrap up

Well the official dogzonline results are final and I know lots of people think this is worth nothing. However for us a breeders it is a great time to reflect not only on show results but on all our wonderful performance results. With the combination of these we are again Number 1 Breeder Weimaraners 2018 (*dogzonline pointscore 2018)

Our team of wonderful smart and good looking dogs have got us the number 1 breeder again in 2018. We are number 2 Gundog Breeder in Australia!

?Joel Wallis and Hank (Aust Sup Ch Bromhund Bulletproof) Hank only show sparingly this year after gaining his Supreme title at the being of the year. He had great success at both Melbourne and Sydney Royal this year taking the Dog CC and Runner up BOB. Huge congrats Joel and Hank look forward to seeing him back out and about more in 2019!

New Show titles
?Aust Ch Bromhund Just All Attitude "Jewel" winning a Best in Group handled by Eva Tulk huge thanks to the Tulk family for showing her now living with Dion and Arrow.
?Aust Ch Bromhund Exotic Tails TD “Zoe” – Well done Michael Yeo and to Sharon that handled her to her title.
?Aust Ch Bromhund Peri “Billy” – Now working on his performance training with Sarah and Craig good luck for 2019

Other winners..
??Aust Ch Bromhund Underneath The Radar “Cue”- 2 x Best in Show & runner up Best in Show Specialty, Best in Group and multi runner up in Groups. This makes Cue Number 1 Gundog NT!!! owners Guy and Rebecca Williams NT
?Aust Ch Bromhund Luscious Luster “Missy” – Multiple runner up in group winner
?Aust Ch Besko Cols Many Spirts (AI) “Jess” – Runner up in Group and class in group wins - well done Angela Tulk
?Bromhund Secret Weapon “Archer” finished his title at the end of this year he has had a hugely successful puppy class. Best Puppy in Show at Spring Fair Best Puppy in Show Vic Gundog Show. Runner up Best in Show Specialty Wei Club of Vic and Runner up Best in Group win. Watch for him in 2019
?Bromhund Unlace Me “Lacey” also finishing her title at the end of this year she also has had some lovely wins Best Minor in Show at Vic Gundog Show.
?Aust Ch Weisup Royal Flush at Bromhund (IMP NZ) “Gambler” arrived in Europe he has a very successful results in the field to gain his stud dog clearance only shown sparling in 2018 hope to see more of him in 2019. His half sister
?Aust Ch Weisup Along Came Polly to Bromhund (IMP NZ) “Polly” had a hugely successful 2018 with limited showing finished her title with a Best in Group and Puppy in Show also Best in Group at Spring Fair Best in Show Weimaraner Specialty.

2019 we have some exciting youngster coming through and looking forward to Dodger and Gambler results in Europe.

To all our wonderful owners of our dogs thank you for doing so much with them and making them part of your family.?

Hope I have not forgotten anyone!! 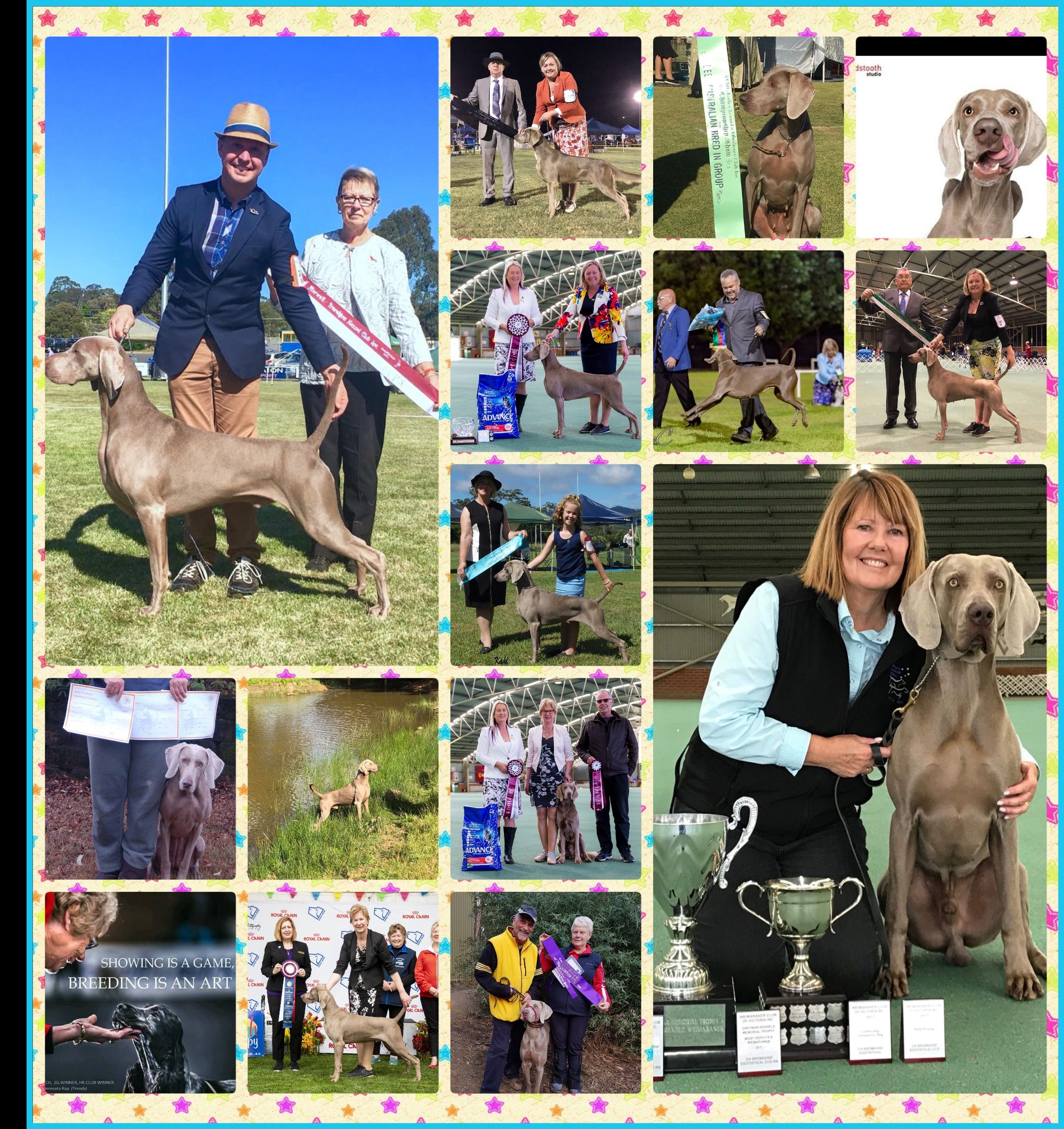 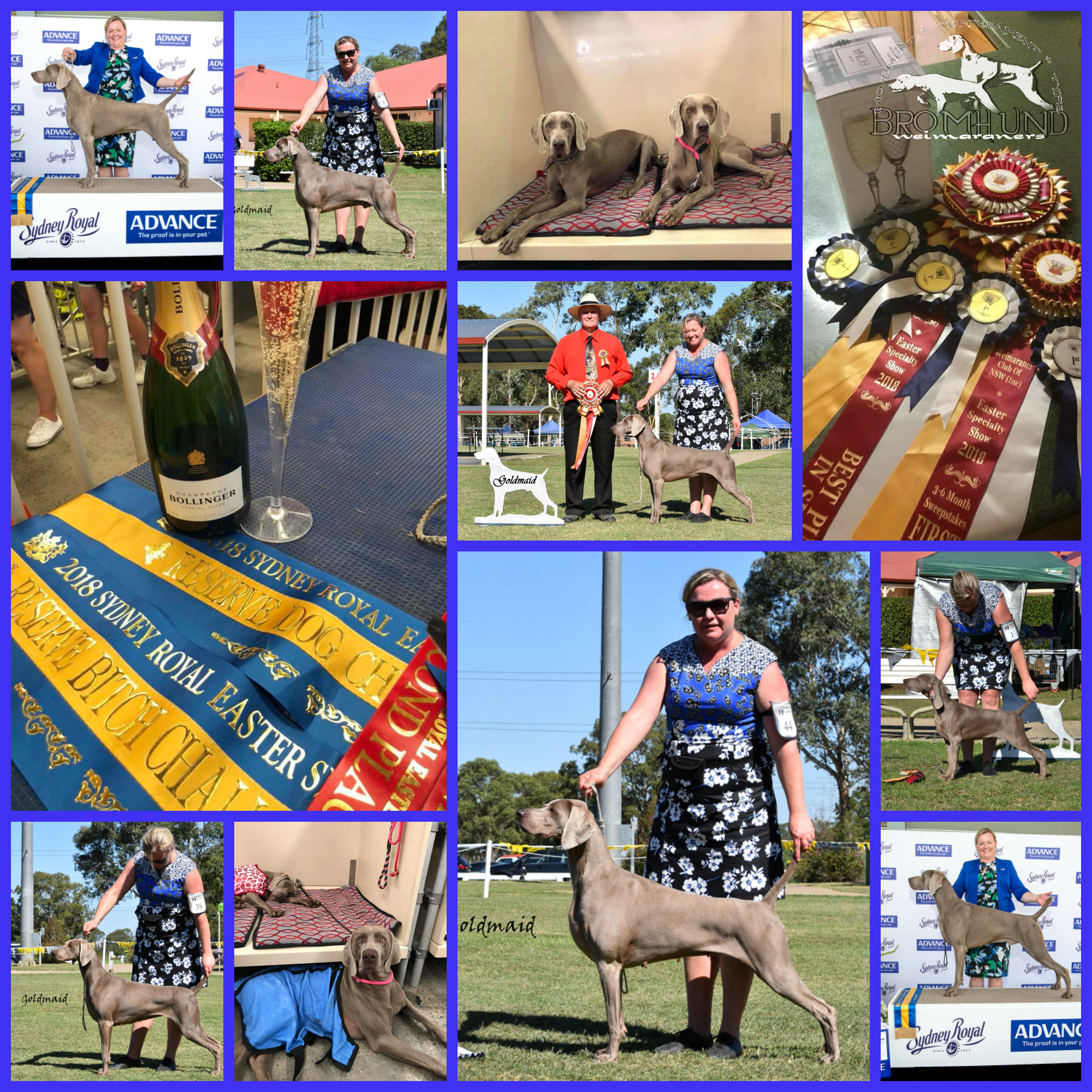 Very proud to announce that Hank is now a Supreme CHAMPION 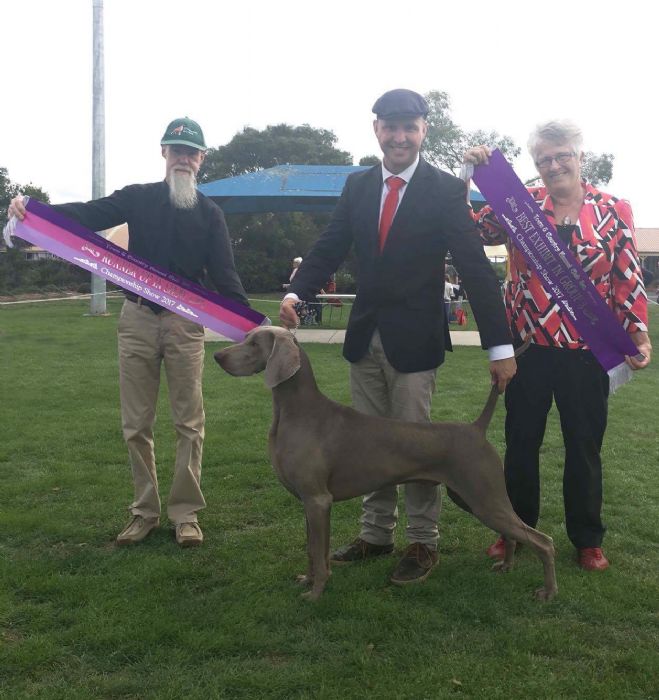 Billy then finished his show title our 170th Champion!!! 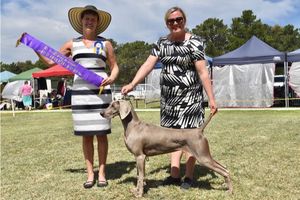 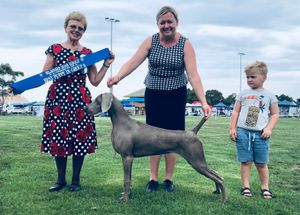 Missy Polly and her nice wins 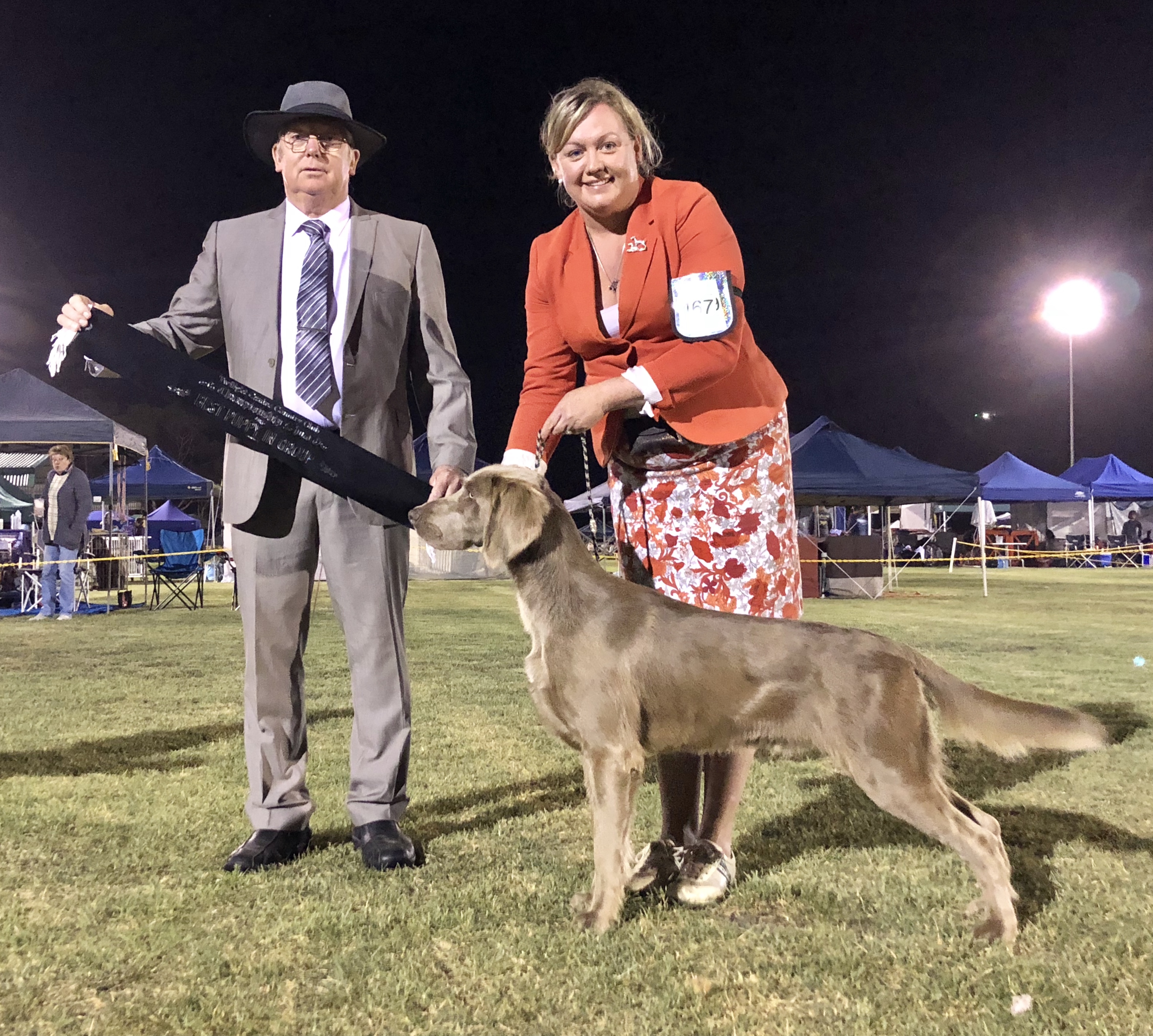