In 1972 John brought me home a male Weimaraner named "Ch Rambi Waldmeister CDX CM” (Rufus). He was the runt of the litter and had character plus! And the love of our lives. On moving to Queensland he began obedience school and excelled at this getting his CDX with ease. With this came the introduction to Retrieving Trials again at which he excelled and was rarely beaten by other gundogs and obtained his CM in predominantly Labrador tests.

We obtained what was to be the foundation bitch for Bromhund. The bitch “Ch Whimani Grey Haze CDX CM” (Helga) a half sister to “Rufus”. She not only had the same talent as Rufus but also was an exceptional looking bitch for that time. She was show bitch of the year for 4 years and the most versatile Weimaraner for 2 of those years. On mating her to the 2 best dogs in the country we couldn’t get anything better than her and so our quest for a larger gene pool and John’s trip to the USA.

In 1978 John Mayhew travelled to the USA to look at Weimaraners and came back with the view that the Americans had got the very best gene pool available from Germany after the war and that they were about 30 years ahead of us. With this in mind a dog was purchased for his dual purpose pedigree. With the help of Virginia Alexandra,Jackie Isabell and Alice Morgan Eng.Sh/NZ/& Aust Ch. ARIMAR’S ROLF VD REITERALM (IMP USA) was imported into Australia in 1980. On his way he obtained his show titles and he still remains the only dog to obtain these to date. His sired 68 champions and many dual champions in field, retrieving and obedience, with many Best in Show winners and will be found in the majority of top dogs today. He lived to the full and died at the age of 13 years and 3 months.

In 1983 we moved with our family and our dogs 2 of whom were imports Eng.Sh/NZ/& Aust Ch. ARIMAR’S ROLF VD REITERALM from the states and SALTO VOM ZEHNTHOF (IMP GERMANY) and a couple of our foundation bitches. Then one day we received a letter from Judy Colan re a longhaired bitch that Chris Grisell had from Judy’s dog Ch Colsidex Big Spender and Chris’s bitch Ch Nani’s Cascade vd Reiteralm There were 3 LH’s in the litter and as the US didn’t recognise them she offered one to us. You can image our excitement at this prospect as we had bred the first LH litter in Aust. And felt the variety had its place with in the breed. So NANI’S HELGA FOR BROMHUND (Imp USA) (Helga) came over via Hawaii. Her confirmation hadn’t been seen in this country before with an excellent shoulder and backend which consolidated when used with Tank, and they went on to produce 10 champions with every puppy being different, but quality. There son Ch Bromhund Crossfire has a lot of Helga’s attributes being a biddable character to live with, a great pointer and sire of some great moving show dogs. He was also top show dog for 2 years. Among some of her progeny were many BEST IN SHOWS and Specialties BEST IN SHOW winners, as well as UD AD and CM in retrieving titles.

So continuing our ideal to produce dual purpose dogs we imported semen from AM CH NANI’S CLASS CLOWN AT TASAIRGID (UK). This came about by my trip to the UK, Germany and the USA looking at Weimaraners in 1993. Class had just arrived in the UK and I was impressed with his topline, movement, head, colour and lovely front. My daughter Suzanne then did a trip a couple of years later and saw him again with similar impressions. We then decided that all his attributes would only consolidate our lines so with the help of Alan & Jean Fairlie, we imported his semen and have produced 4 quality dogs from the one litter and all are Australian Champions. His last litter arriving 10 years after his first litter at Bromhund.

When visiting Germany for the breed club centenary in 1997 John and I came home via the UK and went to a breed specialty show, where we were very impressed with the dogs from “Sireva Kennels”. Gil Averis was kind enough to offer us a dog SIREVA WOBURN (Clyde) and a bitch SIREVA EXECUTIVE DESIGN (Bonnie). These two dogs have proved very valuable to our breeding program.

In 2003 we leased Bromhund Greta Garbo NRD to Greywei Kennels, they bred her to Frozen Semen from AM Ch Nani's Smart Aleck JH BROM.  We where lucky enough to get a female puppy from this litter Aust Ch Greywei Just to Smart AI "Madison". Madison has had 3 litters her first litter to Am/Aust Grand Ch Nani's Sovereign Cross Check JH "Boomer" this litter line breed to the famous Nani's lines has produced our latest stud dog Aust Ch Bromhund In The Know "Harry".  Her 2nd Litter was to Am Ch Nani's Class Clown the last of the semen from Class we where fortunate to get 2 stunning girls from this AI. Aust Ch Bromhund Madison Avenue AI "Carrie"
& Aust Ch Bromhund Manhattan AI "Charlotte"  Co/owned with Greywei Kennels these 2 girls hold exciting future ahead. Her 3rd litter ( 2 puppies) to "BISS Aust Grand Ch Bromhund High Fidelity"which produced RUBISS Aust Ch Bromhund Zone In "Zinc"

In 2005 we registered as Bromhund Kennels to incorporate Suzanne into our prefix, Suzanne has been involved with the Weimaraners since birth and has shown Weimaraners since she was big enough to run around with them. She now handles all of our dogs and has had great success with Cusack "BISS Aust Grand Ch Bromhund High Fidelity" campaigning him to his grand title in 2007. As well as having his semen exported to both USA , Canada & New Zealand.  She will continue to play an important part in Bromhund Kennels and taking the kennel into the future.

To date we have bred 161 show champions, 4 Australian Grand Champion, 1 Supreme Champion the breed's first Grand Champion in New Zealand, the first Weimaraner Longhair Champion in Canada, Retrieving Trial Champion and many working and obedience titles. We are looking forward to the future with a wider gene pool to produce good looking intelligent versatile Weimaraners to take us into the 21st century. 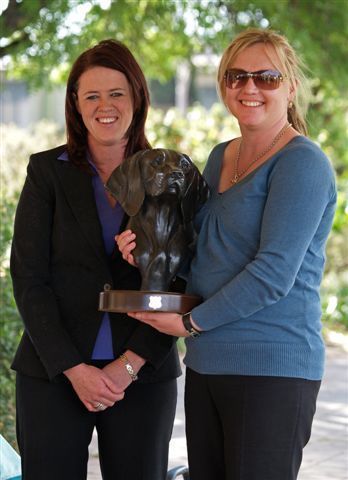 Suzanne with Judge Ms N Ryan winning Puppy in Show Trophy at the Wei Club of SA. This special Trophy donated by Alan Townley in memory of our dear and missed freind Jill Townely. 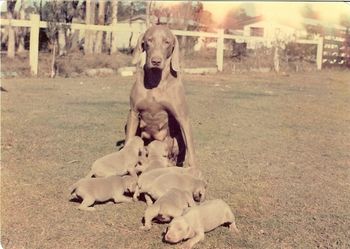 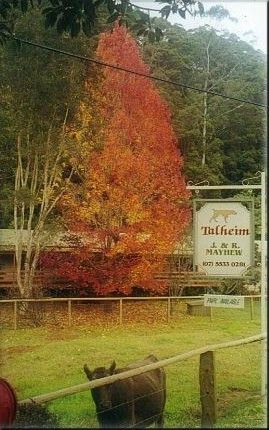 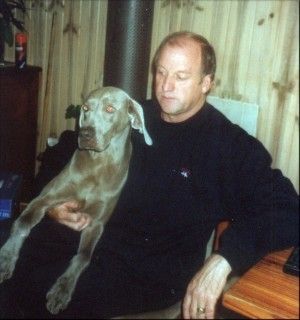 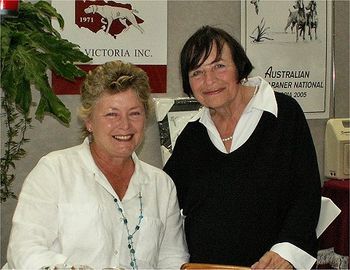 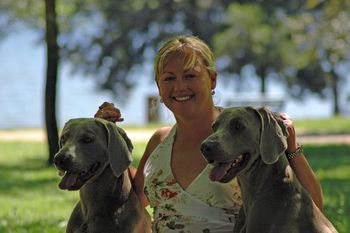 Suzanne with Brock and Cusack 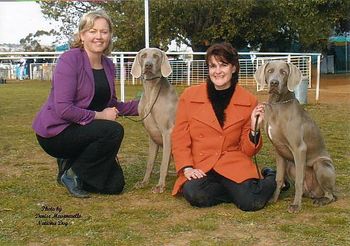 Suzanne & Debbie (Greywei Weimaraners) With Cusack and his daughter Willow